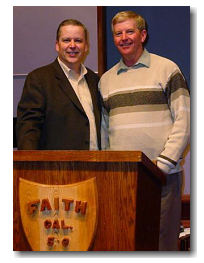 A few weeks before Veteran’s Day, one of the men in the church, who was a veteran, came to me and said he had seen a flag folding ceremony at an event in town, and thought it would be a wonderful thing to have in church on the Sunday before Veteran’s Day. He asked if we could do that. I said yes and put him in charge of the arrangements. I wanted to do it because I want to back up the ideas of the people in the church whenever possible.

This gentleman had seen this particular ceremony, and it had Christian values in it. I thought it would be good to honor the veterans and use it as an outreach opportunity – people in the church can invite veterans, and we’ll advertise it in the newspaper.

So on that Veteran’s Sunday we had shortened worship time, and our quartet sang the National Anthem. We then invited the American Legion to conduct a flag folding ceremony. They presented the colors, and we said the pledge of allegiance. They had a reading that they presented over each folding of the flag.

The captain of this group asked me to call each of the veterans in the service forward, and he saluted each of them and gave each of them an American flag pin and thanked them for their participation in the armed services. (Note: It’s important to not only recognize those that did serve, but also to express gratitude to any present that are currently serving in the military.)

When it came time for the message, I preached a message called “Band of Brothers” based on Romans 8:28-29 in the BBE (The Bible in Basic English).

The rest of my message was stories of heroic action from World War II, Medal of Honor winners. My goal was to tie in the fact that we, too, have a purpose, and some things are more important than our own welfare, and that we should be willing to give our lives for our cause.

Not only did the veterans seem very touched, but so did everyone else. There was hardly a dry eye in the house.

What follows are the notes to the message I preached that morning. If you’d like to obtain a copy of the tape, you can do so by calling 701-222-1004.

Rom 8:28-29(The Bible in Basic English)
And we are conscious that all things are working together for good to those who have love for God, and have been marked out by his purpose. Because those of whom he had knowledge before they came into existence, were marked out by him to be made like his Son, so that he might be the first among a band of brothers:

The WW2 generation was called of God to save the world from 2 natural enemies, Hitler in Germany and Hirohito in Japan.

Characteristics of the WW2 Generation

The whole world was at stake.

There were only 16 democracies left in the world at that time.

It was a whole nation that accepted the commission not just a few. Orv Larson, my brother in law, said about the American people during those years, “Everyone was an optimist.”

All sacrificed. (Gas and food rationing was nationwide. No new cars were even built for a period of time during the war years. Tom Brokaw said they went 10 years without a new car in his family. Billye Brim’s folks moved and worked in a war plant in Oklahoma during the war years. The national speed limit was set at 35 mph for a time to conserve fuel.)

No one thought that they were heroes. All thought it was their duty.
(Eddie Albert) who rescued floating wounded Marines off shore under fire from four machine guns said, “Those guys were in the water and they had to get out. There wasn’t anything heroic about it.

Dr. Charles Van Gorder, who operated for 36 hours straight on hundreds of GIs, at times on his stomach on the floor because of the bullets flying through the medical tent.

Soldiers, to get the job done, had to think of something other than themselves and their own comfort.

17-year-old Marine Jacklyn Lucas, who had enlisted at the age of 14 by lying about his age, hurled himself on two grenades on Iwo Jima rather than let the explosions kill the other members of his fire team. Surviving the blast, he said stoically, “One of us had to go.” He was the youngest Marine to receive the Congressional Medal of Honor.

Consider Captain John P. Cromwell, U.S. Submarine Commander, who after a valiant fight realized his sub was disabled. He knew that if he was captured and tortured by the Japanese he might give up valuable secret information. So he chose not to be captured. After passing the word to abandon ship to his crew he and 11 officers dived the submarine with all hatchets open to the bottom of the ocean. He was posthumously awarded the Medal of Honor.

Gena’s dad (my father-in-law) Ray Harman was a flight engineer on a B17 in the 401st Bomb Group. He made 18 missions over Germany before being shot down over France. He was wounded, taken as a POW, and later escaped from the Germans with the help of the French underground. He made it back to Allied lines. All this was done in a waist down cast because of a broken leg. This all happened after a life threatening injury on a previous mission that qualified him for a desk job. But when asked why he chose to fly again he said he had joined up and come over to fly and so volunteered to return to bombing runs when the chance of completing the assigned number of missions was about zero.

(Unknown marine received the Congressional Medal of Honor) when he charged five Jap tanks in the Philippines taking them all out and killing the crews. He was killed later by a Japanese sniper. (Dorrie Miller) First black sailor medal winner at Pearl Harbor was a cook on the Arizona but manned a gun and shot down two enemy planes. He was later killed in the Pacific when his galley was torpedoed. James Fisk, who is a tour guide at Pearl Harbor and is seen on the famous Life Magazine photo, stood at his post on his gun turret on the West Virginia in Pearl Harbor until ordered off. Audie Murphy, 5th grade dropout, who was and still is the most decorated soldier in history.

Gordon Larsen, South Dakota, joined the 3rd Marine Division, 9th regiment and was sent to the south Pacific where he was a Browning automatic rifleman. He was in some of the heaviest fighting over World War II, landing at Guadalcanal, Guam, Okinawa. Gordon’s brother Jim was also in the 3rd Marines and was killed in action. The group Gordon Larsen trained with was 240 men. Only eight returned alive and uninjured. One day, on Halloween some years after the war, Gordon was in the post office where Tom Brokaw’s mother worked. Gordon was upset that some of the teens of the town had been rowdy the night before. Tom Brokaw’s mother said, “Why Gordon, what were you doing when you were seventeen?” He looked at her for a moment and said, “I was landing on Guadalcanal.”

Victory in spite of the cost. (Winston Churchill and FDR) Churchill said in 1941about the U.S entering the war after Pearl Harbor “so we have won after all.” (Ike) Eisenhower ordered thousands to battle and lived with the decision. George “Blood and Guts” Patton said God had anointed him for war. General Anthony McAuliffe Who said, “Nuts” to overwhelming odds at Bastone.

Unity to purpose and not to personality was a requirement of the assignment. Many soldiers hated their leaders but followed them to victory.

They took ownership of their lives. (Tom Broderick, Chicago) was blinded for life when hit by an enemy bullet. He had served in the Merchant Marine. He then volunteered for 82nd Airborne and was dropped into France. He was shot in head and blinded for life. Later when asked about the life changing ordeal, he simply said, “I got my head too high in my foxhole.”

Quotes from “Flags of Our Fathers” a book about the men who raised the flag on Mount Suribachi on Iwo Jima.

“Battles are won by teams working together not by heroic individuals fighting on their own. The central function of boot camp was to erase the impulses of individuality and to get the recruit thinking as a member of a team.”
“We trust and depend on one another and that’s how it will be in combat.”
“The Japanese soldiers would fight to the death for the Emperor. That made him a formidable foe. But our boys would fight to the death for one another. And that motive made them invincible.”
“When facing a dangerous task one Marine told his son years later, I kept saying to myself if he can do it, I can do it. I just follow the back of the next Marine.”
“It wasn’t a matter of living or dying of fighting. It was a matter of helping your friends.”

That WW2 generation was called of God to save the world from a natural enemy.

This generation of people today is called of God to save the world spiritually.

We have to think of something other than our own comfort and ourselves.
We are to lose our impulse of individualism and join a team and become part of a cause greater than ourselves. We develop Unity to purpose not to personality. It’s not really about me.

In the popular mini series The Band of Brothers, the 101st Airborne Screaming Eagles where featured. One survivor, Paul C. Rogers, was asked what kept them going through so many battles and with so many casualties?
“We were special because we banded together and were like a big family. I was in one squad in the same platoon all through the war. We formed into a family. I know more about some of those men than I do my own brothers. Throughout it all we stayed together, fought together and were bonded together like a band of brothers.”

Phil. 3:18-19
For many walk, of whom I have told you often, and now tell you even weeping, that they are the enemies of the cross of Christ: Whose end is destruction, whose God is their belly, and whose glory is in their shame, who mind earthly things.

Each local church today is to be a band of brothers who care for each other and do what it takes to accomplish the mission we are on.