Honoring Our Greatest Generation
By Pastor Larry and Pam Millis 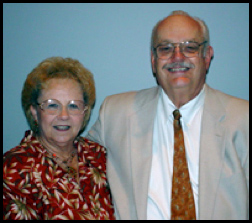 Larry and Pam Millis founded Living Word Fellowship Church in St. Joseph, Illinois in January of 1981. They graduated from Rhema Bible Training Center in 1980, are the parents of four children, and continue to pastor and lead their vibrant church in central Illinois.

What They Did: On Saturday, November 14, 2009 a celebration and tribute was held to honor veterans from WW-II and the Korean War, as well as people who grew up during the Great Depression.

Members of Living Word Fellowship in St. Joseph worked and planned for months to make the event truly memorable. There were lots of flags and red, white & blue banners, in addition to several tables of collected memorabilia on display. A special luncheon was served, followed by a “USO”-type entertainment presentation. Songs from the era were performed by a chorus of church members with the songs ranging from sentimental and nostalgic to fun and patriotic. There was even a little comedy (ala “Abbott & Costello”).

Following the “show,” Living Word’s Senior Pastor, Larry Millis, delivered a special message entitled “Everybody Needs a Hero”, reminding everyone of the spirit of loyalty, teamwork and country that seemed to bond that generation together with a common goal and cause.

Each honored guest was then individually recognized and presented with a small gift and much thanks for their service and sacrifice to protect and preserve our nation and freedom itself.

The afternoon ended with an emotional singing of “God Bless America” by everyone
present.

How They Did It: We started our "guest list" with members of our congregation. We of course focused on those who were a part of the "target group". We also asked everyone to let us know if they had a close friend or relative that was a part of that group. (WW-2 vets, Korean vets&/or those who grew up during the Great Depression). We sent invitations to all the names we were given, inviting them to come as our guests for the luncheon and very special Tribute we were planning for them. We also asked them if they would share a "memory or two" from that era. We told each of our invited guests they could bring someone with them (a family member or friend)…we figured quite a few of our invited guests might need transportation &/or assistance. We also told our church members that if they had submitted a name to follow up on the invites, so their family members would not be "put off" by an invitation from people they didn’t know.

Our guest list didn’t seem quite large enough just working through our congregation, so we extended the invitations through the other local churches (asking them to do what we had done, but to send us all the names, so WE could send out the "official" invitations.) Along with our requests for personal memories to be shared, we asked if folks had any memorabilia they would be willing to loan us to put on display. The response was great!!

After getting names from the other local churches, we also contacted the American Legion and Senior Citizens group in St. Joe for a few more names.

The local pastors & their wives as well as the local mayor were also invited. (I think two of the four pastors came and the mayor was there. He talked to us about it for weeks afterwards!! Every time he’d see Larry in town he’d comment about how people were still "buzzin" about our celebration!!) [He’s a local hairdresser/barber and has lots of local contact with people.]

I can’t remember exactly how many "official" guests we had attend, but EVERYONE who came was exceedingly blessed!! The comments and feedback were tremendous. We received several Thank-You notes/letters and even a few monetary gifts of appreciation.

Our congregation worked VERY HARD to bring everything together. Decorations – food – entertainment, etc. … it took lots of planning & help!!! The people were troopers! And when it all came together – WHEW!  —  We were soooooo blessed!!!.

There were SEVERAL tables set up in the lobby and they were all COVERED with various memorabilia and keepsakes. A man in our congregation made 4 "mannequins" and each one was outfitted with an actual service uniform and they "stood at attention" at the entry to our sanctuary (which was transformed into our "banquet hall").

The Youth Group made up the "bulk" of our "wait staff"serving the meals & drinks. Our kitchen crew cooked Chicken & Noodles-Mashed potatoes-green beans-fruit salad-and homemade pies!!! (Real comfort food). The SuperChurch kids were part of our "Yankee Doodle Dandy" song. The "chorus" sang songs like: "Remember Pearl Harbor" – "This is The Army, Mr. Jones" – "Don’t Sit Under the Apple Tree w/Anyone Else but Me" (Ala the "Andrews Sisters" – our three daughters…Lori came from Ind.) – "They’re Either Too Young or Too Old" (a "Rosie the Riveter" routine) – "It’s Been a Long,Long Time" – "Comin’ In on a Wing & a Prayer"….we also had a couple guys who did an Abbott & Costello routine.

After the "Entertainment", Larry gave a brief message entitled: "Everybody Needs a Hero". Then we did "Roll Call"…Larry read each guest’s name (& told which branch of the service they were a part of ) (Those who weren’t veterans were simply introduced). Each guest was presented with a small gift from Living Word. Next we sang the theme song from each branch of the Service [Army-Navy-Marines-Air Force] and asked those who served in each to stand during "their" song. Then we showed a video of Red Skelton…explaining the "Pledge of Allegiance" and we ended with the pledge followed by everyone singing "God Bless America" (lots of tears)!!!

Those who attended were so thankful and many asked us if we were going to make this a regular event. I’m not sure we’ll do it again for veteran’s day, but we might do something for Memorial Day (or July 4th) in the future (not 2010 though).