You are here: Home1 / Free Resources2 / Articles by Tony Cooke3 / What Most People Miss in the “Christmas Card” Verse

What Most People Miss in the “Christmas Card” Verse 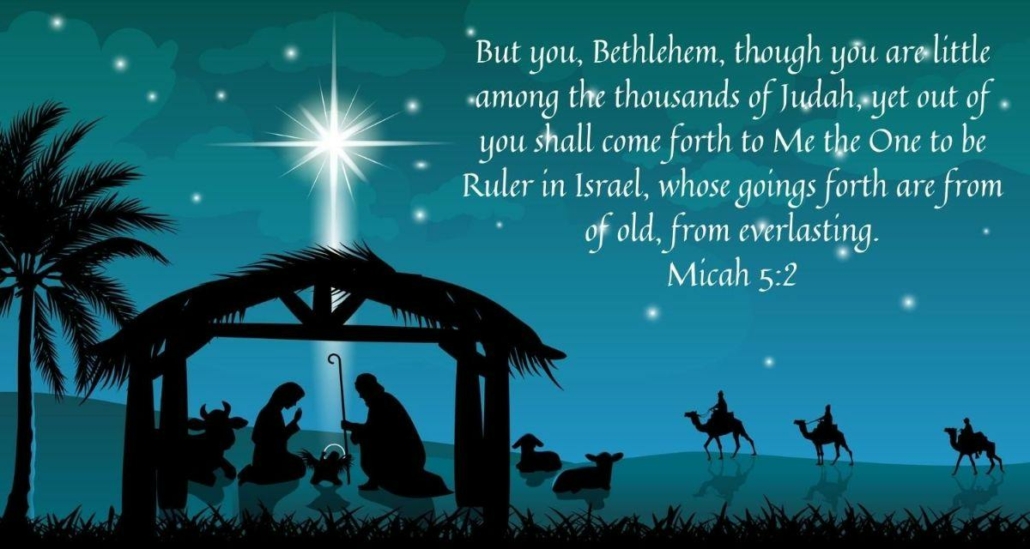 One of the oft-cited Bible verses on Christmas cards is Micah 5:2, which predicts Bethlehem as the place of the Messiah’s birth. When King Herod went into panic mode because he heard that a new king had been born, the chief priests and scribes cited Bethlehem as the prophesied location (Matthew 5:1-6).

Here’s what Micah wrote more than 700 years before Jesus’ birth:

“But you, Bethlehem Ephrathah,

Though you are little among the thousands of Judah,

Yet out of you shall come forth to Me

The One to be Ruler in Israel,

Whose goings forth are from of old,

Jesus’ birth in Bethlehem is considered to be one of three hundred Old Testament prophecies that he fulfilled, and that is a conservative estimate.

As wonderful as the prediction of Jesus’ birth in Bethlehem is, most people miss something very powerful in that verse, something that is far more profound (in my opinion) that the prediction of his birthplace. The last part of that verse speaks of the very nature of who Christ is, specifically, his pre-existence and his activities prior to being manifested in the flesh.

(NKJV) “Whose goings forth are from of old, from everlasting.”

NASB) “His times of coming forth are from long ago, from the days of eternity.”

(ESV) “Whose coming forth is from of old, from ancient days.”

(SEPT) “His goings forth were from the beginning, from eternity.”

One commentary sheds great light on this passage: “The terms convey the strongest assertion of infinite duration of which the Hebrew language is capable. Messiah’s generation as man coming forth unto God to do His will on earth is from Bethlehem; but as Son of God, His goings forth are from everlasting.”

At the time Micah wrote this, he referred to a future birth, but he also referred to ancient activity. What does this mean to us? Long before Christ took on flesh in Mary’s womb and was manifested on earth, he had been active in his pre-incarnate state. This correlates perfectly with John’s statements telling us that Jesus “was in the beginning with God” (John 1:2 NKJV) and that “the world was made through Him” (John 1:10 NKJV).

The Rock that Followed Israel was Christ

Before he was manifested in the flesh, Christ did more than create the universe. Remember… his goings and comings forth were from old, from ancient days. So, what else did he do prior to Bethlehem? The apostle Paul makes a remarkable statement revealing that Christ actually traveled with the children of Israel as they traveled from Egypt to the Promised land. He writes, “they drank from the spiritual rock that traveled with them, and that rock was Christ” (1 Corinthians 10:4 NLT).

It Was Christ Who Spoke from the Burning Bush

Not only did Christ travel with the children of Israel through the wilderness, but he actually “went forth” and met with Moses to get Israel’s deliverance started. The “I AM” who spoke to Moses from the burning bush was Christ himself. Look at the original story:

Christ was I AM Before Abraham Was Born

Consider, then, how Jesus connected himself to the burning bush incident which had happened more than thirteen hundred years before his birth in Bethlehem.

“Unless you believe that I AM who I claim to be, you will die in your sins.”

“Who are you?” they demanded.

Jesus replied, “The one I have always claimed to be.”

“When you have lifted up the Son of Man on the cross, then you will understand that I AM he.”

“Your father Abraham rejoiced as he looked forward to my coming. He saw it and was glad.”

The people said, “You aren’t even fifty years old. How can you say you have seen Abraham?”

Jesus answered, “I tell you the truth, before Abraham was even born, I AM!”

At that point they picked up stones to throw at him. But Jesus was hidden from them and left the Temple.

Why did this interaction end with the people wanting to kill Jesus? Because Jesus had identified himself as the I AM. They clearly understood that he was claiming to be the one who had spoken to Moses through the burning bush, and in their minds, this was blasphemy.

These religious people knew the Scripture well. They clearly recognized that Jesus was appropriating—relative to himself—the very name that God gave himself when Moses asked God about his identity.

This was not the only time that people in Jesus’ day clearly understood him to be equating himself with the eternal God. Having declared his union with the Father in John 10:30, we read: Once again the people picked up stones to kill him. Jesus said, “At my Father’s direction I have done many good works. For which one are you going to stone me?” They replied, “We’re stoning you not for any good work, but for blasphemy! You, a mere man, claim to be God.” (John 10:31-33 NLT).

Let me share one additional pre-nativity appearance of Christ, this one from the book of Joshua.

And it came to pass, when Joshua was by Jericho, that he lifted his eyes and looked, and behold, a Man stood opposite him with His sword drawn in His hand. And Joshua went to Him and said to Him, “Are You for us or for our adversaries?”

So He said, “No, but as Commander of the army of the LORD I have now come.”

And Joshua fell on his face to the earth and worshiped, and said to Him, “What does my Lord say to His servant?” Then the Commander of the LORD’S army said to Joshua, “Take your sandal off your foot, for the place where you stand is holy.” And Joshua did so.

How many times had Joshua heard the story of the Great I AM telling Moses to take his shoes off at the burning bush, because he was standing on holy ground? This appearance of Christ is different in form—here he appears as the Commander of the army of the Lord—and yet Joshua bows before him and worships him. This could not have been an ordinary angel as only God is to be worshipped, and no holy angel or man of God would have allowed such reverence from Joshua.

There are other incidents of Christ appearing before Bethlehem (sometimes called theophanies) we could choose from but thank God for these we’ve discussed and for all that he did. “Though he was God, he did not think of equality with God as something to cling to. Instead, he gave up his divine privileges; he took the humble position of a slave and was born as a human being” (Philippians 2:6-7 NLT).

As Jesus prepared to have what we call “the last supper” with his disciples, John tells us that Jesus “knew that his hour had come to leave this world and return to his Father” and that he “knew that the Father had given him authority over everything and that he had come from God and would return to God” (John 13:1, 3 NLT). Shortly after this, Jesus prayed, “And now, O Father, glorify Me together with Yourself, with the glory which I had with You before the world was” (John 17:5 NKJV).

The pre-existence of Jesus is unquestionably taught in the Bible. Though Christ was manifested in the flesh at Bethlehem, he had existed eternally with the Father and with the Holy Spirit from eternity past. Oswald Sanders says it this way: “Jesus was unique among men in that His birth did not mark His origin, but only His appearance as a man on the stage of time.”