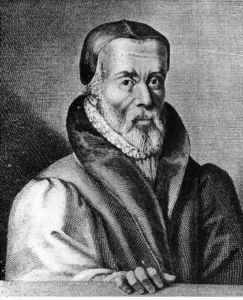 He was born two years after Columbus sailed west and discovered the Americas. His martyrdom preceded Martin Luther’s death by ten years. His contribution to the church was of incalculable worth. Still, not as many people are as familiar with William Tyndale (1494-1536) as they are with Luther. Tyndale’s great passion was to put the New Testament into the language of the English-speaking people.

The New Testament was not known by the common people, and many priests and religious leaders had little to no knowledge of Scripture. What was known was church dogma, and the institutional church and the government forbade the Scripture being in the language of the people. One hundred years before, John Wycliffe had partially translated the New Testament into English from the Latin, and after his death, officials had dug up his body, burned his remains, and thrown his ashes into the river.

In 1401, Parliament made legal the burning of heretics at the stake. Seven years later, the archbishop of Canterbury decreed that no English translation of the Bible could be produced without the permission of the bishops. A century later, in Tyndale’s time, seven Lollards (those who followed the teaching of Wycliffe) were found guilty of teaching their children the Lord’s prayer in English, and resultantly, were burnt at the stake.

An ordained priest, Tyndale had discovered the beautiful truth of justification by faith while studying the Greek New Testament, and he desired with all of his heart to see this truth, along with all of Scripture, presented to and put into the hands of the people of England. However, the bishop of London flatly refused Tyndale’s request for the church to subsidize the endeavor.

Agonizing over the spiritual darkness of a church and a people who had no true knowledge of Scripture, Tyndale remarked, “I perceived how that it was impossible to establish the lay people in any truth except the Scripture were plainly laid before their eyes in their mother tongue.” A priest told Tyndale that it was more important to have the pope’s law than to have God’s law. Tyndale responded, “If God spares my life, before many years, I will cause a boy who drives a plow to know more of the Scripture than the pope does.”

Recognizing how unwelcome his intentions were and how dangerous the work would be, Tyndale left England and went to the continent of Europe where he undertook and completed his work. Once Tyndale fled England, he never returned. During his twelve years in various European countries, Tyndale was a fugitive, a hunted man with a price on his head. Spies were dispatched on multiple occasions by English authorities to track Tyndale down and arrest him. To avoid detection, Tyndale moved from city to city and used different printers to produce his New Testaments. 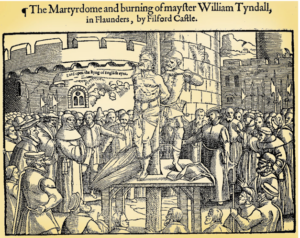 While Tyndale succeeded in getting the New Testament translated and distributed throughout England, his mission ultimately cost him his life. A spy located and befriended Tyndale, later leading him into a trap. He was arrested and spent more than sixteen months in a deplorable dungeon. At trial, he was excommunicated and condemned as a heretic. At his execution, he was strangled to death before his body was burnt. His last recorded words were, “Lord, open the King of England’s eyes.” They had stopped Tyndale, but not before the Word of God had been begun proliferating throughout England.

Tyndale was a great linguist (he was proficient in eight languages), and yes, he was very consecrated in his commitment to God and to getting the Bible to the common people, but Tyndale had need of support and assistance. Author John Rinehart notes:

“God intervened through a godly businessman named Humphrey Monmouth. Monmouth protected Tyndale, provided financial support, and he even used his merchant ships to smuggle the first English New Testaments into England. Very few people have ever heard of Monmouth, but his partnership with Tyndale changed the world.”

Monmouth’s partnership with Tyndale cost him far more than finances. Because Tyndale was breaking church and English law by translating and distributing the New Testament in the language of the law, Monmouth was arrested and spent twelve months in a dark, cold prison cell in the Tower of London. Among the twenty-four charges Monmouth faced was assisting with the translation, printing, and distribution of Tyndale’s New Testament.

Others assisted Tyndale as well. Another well-to-do businessman named Thomas Poyntz in Antwerp protected and provided Tyndale with housing and finances while he carried out his work. Like the many “who were contributing from their own resources to support Jesus and his disciples” (Luke 8:3 NLT), Tyndale had people whose natural support made his work possible.

Tyndale’s dying prayer (that God would open the eyes of the King of England) was answered. Scripture in the English language took root and multiplied throughout England as other translators and publishers flooded England with Scripture. Seventy-five years after Tyndale’s death, another English king—King James—authorized a team of scholars to produce an updated, authorized translation of the Bible.

Maybe you’ve never read Tyndale’s official version of the New Testament, but I assume at some point in your life you’ve read the King James Version. Though some of its verbiage may seem antiquated to modern readers, its impact upon western civilization and the world is inestimable. Did you know that scholars estimate that 80-90% of Tyndale’s wording passed into and was used by the fifty-four translators who brought forth the King James Version of the Bible?

The translators of the King James Version were highly respectful and appreciative of the English translations that had preceded theirs. In the preface of the original KJV, the translators wrote:

“It is necessary to have translations… Translation it is that opens the window, to let in the light; that breaks the shell, that we may eat the kernel; that puts aside the curtain, that we may look into the most Holy place; that removes the cover of the well, that we may come by the water, even as Jacob rolled away the stone from the mouth of the well, by which means the flocks of Laban were watered [Gen 29:10]. Indeed, without translation into the vulgar tongue, the unlearned are but like children at Jacob’s well (which was deep) [John 4:11] without a bucket or something to draw with.”

Speaking of previous English translations (and Tyndale’s was the first New Testament translation from the Greek), the King James translators wrote:

“We are so far off from condemning any of their labors that travailed before us in this kind, either in this land or beyond sea… we acknowledge them to have been raised up of God, for the building and furnishing of his Church, and that they deserve to be had of us and of posterity in everlasting remembrance.”

That is amazing! Even the King James translators were not “King James Only” advocates. Of course, they recognized that advancements and improvements can always be made in translation work, but their tone was clearly respectful to other works. They stated:

“Nothing is begun and perfected at the same time, and the later thoughts are thought to be the wiser: so, if we [are] building upon their foundation that went before us, and being helped by their labors, do endeavor to make that better which they left so good.”

What started with a profound sense of consecration in the heart of one man and made possible through the partnership and cooperation of others has radically impacted all of western civilization, and in reality, the entire world. Tyndale was faithful in his generation, rising up to meet the need that God put on his heart. What about us? Are we recognizing the fact that God wants the entire earth to be filled with the knowledge of his glory? What are we doing to partner with God and with others in making God’s dream a reality?