You are here: Home1 / Free Resources2 / Stories and Illustrations3 / Tension in the Toolbox by Tony Cooke

Tension in the Toolbox 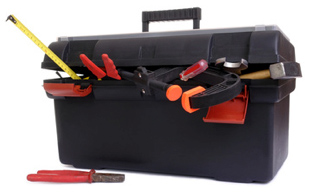 This piece is not original with me. I adapted, revised, and re-wrote it somewhat, but this story has appeared in various forms on the internet under the title, “The Carpenter’s Tools.” I am unsure who the original author is. The versions I read were very insightful and made a great point. It is re-presented here in hopes that it will benefit others.

At first, they were glad just to have been selected. There were other tools that the Carpenter could have chosen, and the tools were pleased that he, a Master Craftsman, had picked them.

But they quickly forgot their initial joy and began to focus on each other. With this, they began to be bothered by and irritated with each other. One by one, each tool began to dwell on the shortcomings and faults of the other tools. No one was exempt from the critical and demeaning evaluation of the others.

The Hammer overheard the others saying that he was hard and noisy, and that he lacked sensitivity and tact.

The Screwdriver was not immune from criticism either. “He’s too rigid and has no flexibility,” they said. “Besides, he never does anything except go around in circles.”

The Screwdriver was quick to point out that the Drill and his family of little Bits also go around in circles, but they’re also loud and tremendously “boring.”

Just then, the Saw (who was agreeing with all the criticisms) came under fire as well. The others said that they didn’t mind a little change now and then, but every time he got involved, all he wanted to do was cut things, and they were always deep cuts that brought division and separation.

Becoming defensive, the Saw immediately noted what everyone already knew about the Sandpaper. “He’s rough and abrasive, and he always rubs everyone the wrong way.”

The Plane, it was pointed out, had to be pushed to do any work, and when he did work, what he accomplished was fairly superficial.

The Ruler was next. It was observed that he was always measuring everyone against himself. He obviously felt that he was “the standard” or something like that. In the same breath, they also criticized the Level. “If the Ruler wasn’t judgmental enough,” they said, “the Level is just as exacting, and just as legalistic.”

The Pliers were criticized for always putting pressure on others.

Even the Pencil got picked on. “He’s so small, and he always seems to get lost; you can’t find him when you need him. When he is found, he’s often dull, and sometimes he even breaks under pressure. He’s always having to get sharpened.”

The Toolbox was now a place of strife and division. The various tools were feeling offended, unappreciated, insecure, and defensive. Each felt a need to validate itself.

Just then, the Carpenter came in and began to use each of the tools. He had a special project to complete, and he saw the value and potential in everyone of them. The Master Craftsman was aware of each tool’s limitations and shortcomings, but he focused on what they could do… what they could accomplish.

He didn’t try to use the Pencil like the Hammer, nor did He try to use the Screwdriver like the Sandpaper. He used each one skillfully and proficiently, according to its perfect design.

As he held and used all the tools, they no longer focused on the shortcomings of the others. Rather, they saw the value that each of them possessed and began to appreciate the contribution that each of them made. They became secure in their own worth and began to celebrate their mutual and collective contributions to the successful completion of the Carpenter’s Project. In addition to recalling the original joy they had in being selected, they now were experiencing the great delight of being useful in the hands of the Master Craftsman.

Instead of being irritated with and putting each other down, they now recognized that others—others who were different—had an essential part to play. Each tool was grateful for its own contribution, but they now realized that it took several tools with unique strengths to do the job well.