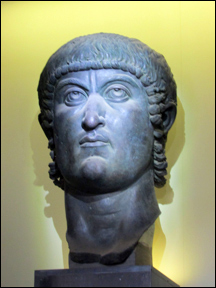 When I, Constantine Augustus, as well as I, Licinius Augustus, fortunately met near Mediolanum, and were considering everything that pertained to the public welfare and security, we thought among other things which we saw would be for the good of many, those regulations pertaining to the divinity ought certainly to be made first so that we might grant to the Christians and others full authority to observe that religion which each preferred; whence any divinity whatsoever in the seat of the heavens may be propitious and kindly disposed to us and all who are placed under our rule.

And thus by this whole some counsel and most upright provision we thought to arrange that no one whatsoever should be denied the opportunity to give his heart to the observance of the Christian religion, of that religion which he should think best for himself, so that the supreme deity, to whose worship we freely yield our hearts may show in all things his unusual favor and benevolence.

Therefore, your worship should know that it has pleased us to remove all conditions whatsoever, which were in the rescripts formerly given to you officially, concerning the Christians and now any one of these who wishes to observe Christian religion may do so freely and openly, without molestation.