I recently shared with a number of ministers in the northeastern United States about how profoundly that region had been impacted in the past by such powerful ministers as Jonathan Edwards, George Whitefield, Charles Finney, D. L. Moody, and A. J. Gordon.

One of the pastors there, Gene Brown, shared a picture with me that he had taken of the headstone of one of Finney’s notable helpers. It simply reads: 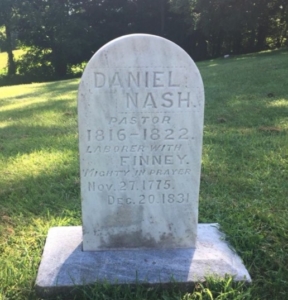 I heard Brother Hagin speak many years ago about the great help Nash was to Finney as a pray-er many years ago, but Finney’s own remarks about Nash are remarkable. Finney also mentions others who comprised a great team of laborers and pray-ers.

Here are a couple of Finney’s statements:

Father Nash, as we called him, who in several of my fields of labor came to me and aided me, was another of those men that had such a powerful spirit of prevailing prayer.

He [Nash] was full of the power of prayer. I found that he had a praying list, as he called it, of the names of persons whom he made subjects of prayer every day, and sometimes many times a day. And praying with him, and hearing him pray in meeting, I found that his gift of prayer was wonderful, and his faith almost miraculous.

On one occasion, Finney’s ministry was facing considerable opposition, and one biographer writes:

Father Nash and Mr. Finney, after a consultation, decided that this opposition must be overcome by prayer, and that it could not be reached in any other way. They therefore retired to a grove, and gave themselves to prayer until they prevailed, and were confident that no power which earth or hell could interpose would be allowed to stop the revival. Finney preached, and Father Nash gave himself continually to prayer.

Nash assisted Finney in several practical ways in addition to prayer, and because of his own ministerial background, sometimes coached and advised Finney. Late in his life, Nash felt Finney was leaning too heavily on prepared notes in his preaching and told him that it was alright to use notes up to a point, “But, when you preach, throw yourself entirely on God.” It was shortly after this that Nash passed on, and his friends wrote Finney and told him, “Beloved Father Nash prayed himself away to the throne.”

As I considered all of this, I was reminded how much each of us is dependent on the help, labor, and assistance of others. In order for this to happen, it takes individuals who are willing to get behind and support others, and sometimes to stand a bit in the shadows while others receive more attention and are more prominent. The fact that Nash’s tombstone would have the words, “Laborer with Finney” speaks volumes. How many people are willing to serve a spiritual leader that way today?

Reading about Nash and the others who labored with Finney reminded me of a statement made by one of the leading evangelists of the Wesleyan-holiness movement, W. B. Godbey (1833-1920). He declared:

Oh! The infinite value of the humble Gospel helpers. Thousands of people who have no gifts as leaders are number-one, helpers. How grand, revival work moves along, when red-hot platoons of fire-baptized helpers crowd around God’s heroic leaders of the embattled hosts.

May God empower spiritual leaders around the earth today and may each of them be surrounded and supported by “humble Gospel helpers” like Father Nash.