Those in the USA know all about Santa Claus… North Pole, Reindeer, Chimneys, Gifts, Jolly, etc. But way behind all of the myth and lore, there really was a Saint Nicholas.

Born in AD 270 in the southern part of modern-day Turkey, Nicholas became the Bishop of the Church in Myra. Nicholas pastored south of the locations of the Seven Churches of Revelation, southwest of the Galatia region, and west of Tarsus and Antioch. His legendary generosity is rooted in stories that he, at times, had dropped bags of gold coins into windows at night to help poor families.

He suffered persecution in the early 300s under Diocletian, but never renounced his faith. Thus, he was known as a “confessor.” He later participated in the first Ecumenical Church Council in Nicaea in AD and advocated for the full Deity of the Lord Jesus Christ.

In his excellent book, The True Saint Nicholas: Why He Matters to Christmas, William Bennett describes what countless Christians, including Nicholas, experienced and endured during the persecution of the Roman emperor, Diocletian.

In A.D. 303, he decreed that Christian churches were to be destroyed, services banned, and scriptures burned. Christians could no longer hold public office. Further edicts brought the arrest of Christian leaders and an order that all Christians sacrifice to pagan gods.

Years of terror followed. Christians who did not submit faced imprisonment or painful death. Some were clawed with iron scrapers, others thrown into cages with leopards or bears, others roasted alive or torn limb from limb.

A Christian who died for his faith came to be known as a martyr, a Greek word meaning “witness.” Martyrs bore witness to the deepest convictions of the followers of Christ. “So many suffered that the murderous ax was dulled, and the executioners grew weary,” wrote Eusebius of Caesarea. Roman legions surrounded one village in Asia Minor to enforce the decree to sacrifice to the gods. When the townspeople refused, the soldiers set fire to the place, killing everyone.

In Myra, Nicholas heard the reports of the spreading horror and prepared himself. He did not have to wait long for the tromp of Roman soldiers in the street, the banging on the door, the command to surrender to Caesar’s will. He followed the soldiers into the depths of a black, suffocating prison, wondering if he would ever see daylight again.

He must have asked himself that question countless times during the following years. Threats were the first weapons his captors used to break him down. When those didn’t work, they tried hunger and thirst. When that failed, they moved on to beatings. Nicholas refused to renounce his beliefs. They pulled him from his cell, tortured him until he lost consciousness, then threw him back into his hole and left him alone until he grew strong enough to be tortured again.

During the long stretches when he sat and waited for the executioner’s summons, Nicholas kept up his ministry. He comforted his fellow captives, urged them to keep faith, and tended the wounded as best he could. He led prayers and worship services. Occasionally he may have been able to receive visitors, and even smuggle out letters to his scattered flock. All the while, he fought to survive from one day to the next.

Meanwhile, outside the prison walls, the fires of hatred and destruction began to burn themselves out. Diocletian, weary and sick after a twenty-year reign, abdicated his throne. His successor, Galerius, redoubled the persecutions, but the people grew so sick of the bloodshed that he finally gave in. From his deathbed, Galerius issued an edict of toleration restoring rights to Christians in parts of the empire.

Then, in AD 313, the new emperor, Constantine, issued the Edict of Milan, which banned all religious persecution. Bennett continues:

One morning the door of a dark, cold cell swung open, and a guard with a torch beckoned to the pale man sprawled on the floor inside, a man still young in age but made old in appearance by years of confinement. With faltering steps, the filthy, ragged prisoner trailed the guard down a long passageway and up damp stone stairs. At the top, a brusque voice told him he could go. Another door swung open. Nicholas, shading his eyes with trembling hands, stepped into the daylight.

As we approach the Holiday Season, we celebrate light coming into the world. We also remember those faithful men and women, like Nicholas, who loved the Lord Jesus Christ with an undying love.
Please know that we have a section of Holiday Resources on our website that we trust will be of help to you. 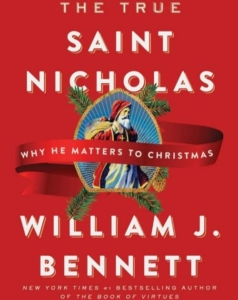 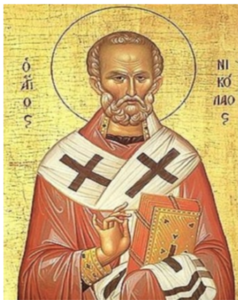 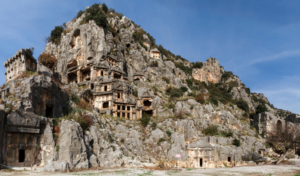