You are here: Home1 / Free Resources2 / Articles by Tony Cooke3 / Reflections from a Debate on Eternal Security

Reflections from a Debate on Eternal Security
Tony Cooke 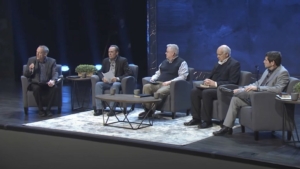 On February 23, 2022, I took part in a debate hosted by Pastor Mark Cowart and Church for All Nations in Colorado Springs—the topic was “Once Saved Always Saved.” It was a good and lively discussion with three other brothers, all of whom were loving and respectful in spite of differing perspectives.

You can watch the full debate by clicking here (https://www.youtube.com/watch?v=c83gitbtBz0)

In preparing for the debate, I was reminded of the bitter fallout that occurred a few centuries back between John Wesley and George Whitefield. Wesley was a staunch Arminian while Whitefield was a strong Calvinist. Ultimately the men reconciled their friendship. Though Wesley had been harsh in his attacks against Whitefield, he wrote another Calvinist the following in 1761:

“Remember, as sure as you are that ‘believers cannot fall from grace,’ others (wise and holy men too) are equally sure that they can; and you are as much obliged to bear with them as they are to bear with you.”

Below are a few of my statements, or at least thoughts I had in my notes:

“When it comes to Eternal Security people should not trust in a doctrine (or a theological interpretation). People should trust in Christ himself.”

When it comes to addressing salvation, we need to avoid these two extremes:

In the New Testament, the question was asked, “What must I do to be saved?” Today, it seems that some are more likely to ask, “What can I do and still be saved?”

Reflections from Leaders in Church History
“I hold further, that those of you who have confessed and known this man to be Christ, yet who have gone back for some reason to the legal dispensation [i.e., the Mosaic Law], and have denied that this man is Christ, and have not repented before death—you will by no means be saved.”
– Justin Martyr (100-165)

Origen (A.D. 184-253) spoke of believers who “decline gradually and little by little, so that it may sometimes happen that if a brief lapse takes place, and the individual quickly repent and return to himself, he may not utterly fall away, but may retrace his steps, and return to his former place, and again make good that which had been lost by his negligence.”

“If, however, being already regenerate and justified, he relapses of his own will into an evil life, assuredly he cannot say, ‘I have not received,’ because of his own free choice to evil he has lost the grace of God that he had received.”
– Augustine (354-430)

“I never taught that a true believer can either totally or finally fall away from the faith and perish; yet, I will not conceal that there are passages of Scripture which seem to me to bear this aspect.”
– Jacob Arminius (1560-1609)

Warnings That Should Be Taken Seriously
James 5:19-20 (NKJV)
19 Brethren, if anyone among you wanders from the truth, and someone turns him back, 20 let him know that he who turns a sinner from the error of his way will save a soul from death and cover a multitude of sins.

2 Peter 2:20-21 (NKJV)
20 For if, after they have escaped the pollutions of the world through the knowledge of the Lord and Savior Jesus Christ, they are again entangled in them and overcome, the latter end is worse for them than the beginning. 21 For it would have been better for them not to have known the way of righteousness, than having known it, to turn from the holy commandment delivered to them.

Hebrews 3:12-14 (NKJV)
12 Beware, brethren, lest there be in any of you an evil heart of unbelief in departing from the living God; 13 but exhort one another daily, while it is called “Today,” lest any of you be hardened through the deceitfulness of sin. 14 For we have become partakers of Christ if we hold the beginning of our confidence steadfast to the end.

Pastoral Considerations
“Consider the condition of your hearers. Reflect upon their spiritual state as a whole and as individuals, and prescribe the medicine adapted to the current disease, or prepare the food suitable for the prevailing necessity.”
– Charles Spurgeon

“What is food for one man may be bitter poison to others.”
– Lucretius (first-century Roman philosopher)

If I am speaking to a sincere, young believer who is immature in his or her faith, and is struggling with assurance, I am going to stress the multitude of verses that deal with assurance of salvation and the security we have in Christ. For example, John 6:37, Romans 8:16, 1 John 5:12-13.

On the other hand, if I am speaking with someone who seems to be spiritually calloused and is flippant toward God, I would likely be inclined to share some of the warning type of verses.

I believe this is consistent with such admonitions as:

Jude 22-23 (NKJV)
22 And on some have compassion, making a distinction; 23 but others save with fear, pulling them out of the fire, hating even the garment defiled by the flesh”.

Romans 11:22 (NKJV)
22 Therefore consider the goodness and severity of God: on those who fell, severity; but toward you, goodness, if you continue in His goodness. Otherwise you also will be cut off.

Regardless of your position, it is important to remember that “we know in part and we prophesy in part” (1 Corinthians 13:9 NKJV). None of us know everything, and we should always remain teachable.

Again, you can watch the full debate by clicking here.