You are here: Home1 / Free Resources2 / Articles by Others3 / Take Your Seat in the Ship by Rick Renner

Take Your Seat in the Ship
Rick Renner

Rick and his wife, Denise, pastor Good News Church in Moscow, Russia. You can learn about their ministry by clicking here. The following article is excerpted from Rick’s book, Turning Your God-Given Dreams into Reality. You can order this book and other resources from Rick at store.renner.org 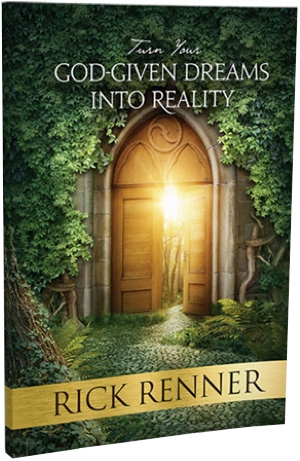 . Anyone in a serving capacity in the Body of Christ has times when he or she becomes weary and tired. I, too, have had many of those moments in my life. When I am tempted to be weary, I first turn to the Holy Spirit for a fresh infilling. This always invigorates me with new strength for the task that has been assigned to me. But then—I nearly always take time to reflect on what it means to be a servant. According to Jesus, taking the role of a servant is one of the greatest honors in our Christian life.

Decades ago, as I was studying First Corinthians 4:1, I found a powerful truth about what it means to be a “minister” as we serve the Body of Christ in our various positions and vocations. Over the years, I have pondered deeply on the truth I discovered, and it has encouraged me to take my God-assigned position more seriously. I’d like to share with you what I discovered about the significance of the Greek word translated “minister,” which Paul used when he wrote, “Let a man so account of us, as of the ministers of Christ, and stewards of the mysteries of God” (1 Corinthians 4:1).

On that day many years ago when I was studying this verse, I was stunned to discover the word for “ministers” was borrowed from the world of slavery. It is the Greek word huperetas, which was a technical term used in the ancient world to describe the very lowest class of criminals. When I saw this, I knew there had to be a very specific reason why Paul would use this word to describe “ministers”—so I dug deep into this subject and found a wealth of revelation. I didn’t particularly like everything I found. But as I meditated on the meaning of this Greek word over the years, the truths I gleaned became a great source of encouragement to me.

This particular group of criminals that the word huperetas described was considered to be the scum of the earth. In fact, these criminals were so low, so detestable, and so contemptible that they were outcast and removed from society, assigned to live the balance of their lives in the bottom galleys of huge shipping vessels. There they literally became the engines of those huge ships.=

And the harsh assignment of these huperetas wasn’t temporary, either. They were sentenced to live the rest of their lives in the darkness below the deck—endlessly rowing, rowing, and rowing. Their entire existence was devoted to keeping that ship moving toward its ultimate destination!

These huperetas were officially called “under­rowers” because they lived and rowed down in the bottom of the ship. Day after day, their job was to heave those massive oars forward and backward, pushing them through the water to make the ship move through the sea.

Take Your Place in God’s Plan!

This word huperetas is the same word the apostle Paul uses to describe those of us who are faithfully trying to do what God has called us to do! According to the Bible, we are the “under-rowers of Christ.” This means, above all else, that God has called us to take our place in His plan—to grab hold of an oar, so to speak, and begin to serve Him practically in some way. We are to keep rowing, rowing, rowing, and rowing, doing our part and fulfilling what He has asked us to do.

Some people tend to sit and watch as achievers reach out to do the impossible. But if you are going to join the ranks of those achievers, you’ll have to do more than just sit around and talk about it. You’ll need to say yes to what the Lord is urging you to do.

And remember—those “under-rowers” didn’t quickly finish their assignment of rowing; it was their responsibility for a lifetime. In the same way, you need to realize that the secret dream God has put in your heart probably won’t be achieved quickly either. It may be an assignment that will last for the rest of your life.

I recommend that you mentally prepare yourself for a long-term stint at doing what God is calling you to do. It will almost certainly take unbelievable strength and energy to move that vision from the realm of dreams to the realm of reality.

So jump into the bottom of the boat, take your place on the “under-rowers’ seat,” and begin rowing with all your might. With each step of obedience you take and each day of faithfulness you live, your little part will help move the “boat” closer to the desired destination—the ultimate fulfillment of God’s plans and purposes in these last days!

We can learn more about how to fulfill our secret dreams as we discover more about the huperetas of ancient times. Each criminal was placed on a bench. There he was chained to a post, and a huge oar was placed into his hands. On the bench alongside him sat other criminals who were also working hard to keep that ship moving.

These men who were seated on the same bench shared common chains, held a common oar, and worked the same number of hours. They all had to provide equal labor to the task. Their entire lives became a group effort. They became inseparable from the other men who were on the bench with them.

Likewise, you’ll find that God won’t call you to do a big job all by yourself. He will call others at the same time to assist you. When you say yes to the will of God—when you jump into the middle of your assigned task and surrender your time, money, talents, and ideas to the Lord—you will discover that others will be right there by your side to help you with the task. You’re not the only one to whom God has been speaking!

You Cannot Fulfill Your Desires and Dreams Alone

It would have been impossible for one servant to move an entire ship by himself. It required the strength and effort of many servants working together in order to move those huge ships.

In the same way, you cannot accomplish what God has called you to do all alone! Look around you! Look at the people God has placed around you to help you fulfill your dream. Don’t ignore them, thinking you can do it alone. If your vision from the Lord is big, it will require others to become involved in what you are doing.

I wouldn’t be able to fulfill what God has told me to do if I had to do it by myself. The vision is too big and demanding. That’s why God didn’t stop after He called me. He also called others to stand with me, pray with me, and stay for the long haul, working beside me “on the under-rowers’ bench.” Their call is just as real as my call. They will answer for their part just as I will answer for mine. And when rewards are given, they will be rewarded for how they helped “row the boat” and keep this ministry moving forward to reach millions of souls.

For example, the Lord has called me to take the teaching of the Bible to spiritually hungry people in the former Soviet Union every day through our media outreach. But at the same time He placed this vision in my heart, He also called partners to pray for the program, pay for television time, and support our ministry in the United States. Without our partners, I couldn’t do my part in the former USSR. They are equally as important as Denise and me and our ministry team.

How about the staff members of our television ministry outreach, such as our television producers, editors, and secretaries? Or how about the dedicated workforce who answer thousands of responses each year from people who view our teaching on various media?

Since 1992, this television workforce has answered millions of letters from those who have written to Denise and me as a result of watching our television program. Our media department has also edited thousands of programs on TV alone and distributed nearly 200,000 separate showings to all of the seven time zones of the former Soviet Union—and that doesn’t even include our teachings that can be seen on a host of other forms of media.

These staff members are the ones who do the work behind the scenes so that these programs can go into millions of homes every day of the week. I am so thankful for those on my team whom God called to help me with this awesome task, because this job is too big for me to do alone!

Your Partners in Life

Likewise, if you are going to fulfill the dream God has given you, you will have to learn how to cooperate with other key people—your partners in life—who can assist you in fulfilling that dream.

When rewards were given to one bench of “under-rowers” for their extremely hard work, every man in the group was rewarded. Since they labored at the same task, shared the same oar, and sweated the same amount of sweat, the entire bench of workers was equally rewarded. On the other hand, if one rower on a bench was lazy and kept the whole bench of rowers from carrying their share of the load on the ship, every rower on that bench was punished.

In other words, the difference in one coworker’s attitude was so powerful that he had the ability to bring about victory or defeat for his entire team. Since each member was vital to success, the under-rowers’ entire existence became a group effort. Therefore, they had to learn how to function as a team.

When these men rowed, the boat moved. When they stopped rowing, the boat stopped. These servants were the driving force behind the speed of the ship. If they ever stopped working hard at rowing, the ship stayed motionless in the water. It was totally dependent on the rowers in the bottom of the boat, powerless to travel anywhere without them.

Similarly, if you are going to move ahead with what God has called you to do—whether it is your ministry, your family, or your business—you must learn how to be a faithful servant, working together with others as a unified team “in the bottom of the boat.”

The bottom of the boat may not be the most pleasurable place to be. Serving day in and day out may seem monotonous and almost boring at times. But sticking with the vision and continuing to row will eventually produce eternal results for the Kingdom of God!