You are here: Home1 / Free Resources2 / Articles by Others3 / Reaching Out With Heaven by Terry Roberts

Our church in Warrenton, Missouri (about 1 hour west of St. Louis), recently hosted the drama, “Heaven’s Gates and Hell’s Flames.” At the drama, copies of our new book, Coming Soon: Heaven, were given to all who answered the altar call. In a town of about 8,000, well over 300 people responded to the altar calls in three nights. It was definitely a visitation of the Lord in our community.

The following weekend was Easter Sunday and we kicked off a five week series called, of course, Coming Soon: Heaven. We are encouraging everyone at church to buy two copies of the book and give one to a friend. It has exceeded our expectations so far!

Your outreach doesn’t have to be this exact one, but the principles worked out well for us of following a big event with a series that attracts unbelievers. The self-published book is under a hundred pages and written to appeal to those who don’t know God or the Bible. It was written from a previous series I preached at the church, and it served as a great bridge from the drama to the church. The following is a sample chapter from the book (Copies may be ordered online for $5 or hardcopies may be purchased for $10 at www.fcf.net).

Coming Soon: Heaven
Chapter 5 – You Will Like This Place 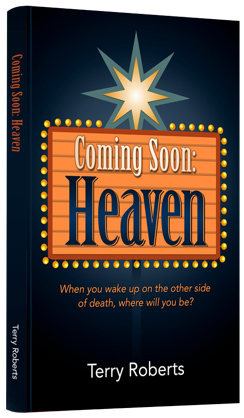 Heaven has not had an appeal to many people simply because it seemed so “other worldly.” As I child I somehow picked up the idea that Heaven would be everyone in a big room in choir robes singing songs. What a bore! Who wants to spend eternity in a never-ending church service?

God is a creator. He is creative. The idea that we will just hang out for eternity doesn’t fit with who he is or with who he has made us to be. Work and activity are part of our future. We will “rule and reign” with him. Jesus tells a parable about an eternal reward for being faithful, being assigned the care of cities (Luke 19:12-26). Exactly what we will be doing isn’t clear from Scripture, but it certainly will not be a place of no activity or creativity. That would not reflect who God is and who we are. It isn’t wise to over speculate where Scripture is silent. We are told the nature of our future, but not the specifics of it.

“Let not your heart be troubled; you believe in God, believe also in Me. In My Father’s house are many mansions; if it were not so, I would have told you. I go to prepare a place for you. And if I go and prepare a place for you, I will come again and receive you to Myself; that where I am, there you may be also” (John 14:1-3 NKJV).

Jesus made it very clear that he was going to prepare a “place” for us. We know what a place is (The dictionary defines it as a space, area, or spot, set apart or used for a particular purpose). That is relevant to us because we often think of Heaven as just being a part of space or a gathering of clouds.

When a couple is expecting a child, they often begin preparing a room for him. It is decorated and painted to match the gender. Great effort is taken to make sure everything will be ready before the baby arrives. That is the idea Jesus is getting across. He went ahead of us to get a place ready “for us.” It isn’t a generic place, but a very specific, custom made place that Jesus is personally overseeing to make sure it fits your specifications. Heaven will not be surprised by your arrival. For at least 2000 years, God has been getting a place ready for you, and the Holy Spirit is working in us to get us ready for the place.

Earth is in many ways a mirror of Heaven. Even though the earth is flawed, much of what we see on earth had its origin in Heaven. In Heaven, there will be rivers, food, animals, trees and so many of the other things that we love on earth. We will have a physical body that is free from the curse of death. Jesus was raised from the dead physically and we are to receive a body like his. We will have a physical body for eternity. We will be able to run, walk, eat, and touch with it.

Heaven will be a wonderful place. In his book, The Weight of Glory, C.S. Lewis notes how believers often underestimate the full riches God has for His children. “…If we consider…the staggering nature of the rewards promised in the Gospels, it would seem that our Lord finds our desires, not too strong, but too weak. We are half-hearted creatures…like an ignorant child who wants to go on making mud pies in a slum because he cannot imagine what is meant by the offer of a holiday at the sea. We are far too easily pleased.”

To understand God’s future plan for mankind, it is helpful to look back at Eden. God created magnificent surroundings for men and women in the garden. The weather was great, the vegetation was stunning, the animals were harmless, and it was a great place to live. In the same way that God created a land filled with life and bright colors and great smells, why wouldn’t that be part of our future? Notice also that Adam and Eve were to have a job in the garden. They weren’t created to sit around all day. Part of God’s nature is to expand his creation and rule. That will be part of our eternity with him as well.

In Randy Alcorn’s book, “Heaven,” he discusses the false idea that Heaven is completely different from the earth. “When Jesus told his disciples, ‘In my Father’s house are many rooms…I am going there to prepare a place for you’ (John 14:2), he deliberately chose common, physical terms (house, rooms, place), to describe where he was going and what he was preparing for us. He wanted to give his disciples (and us) something tangible to look forward to – an actual place where they (and we) would go to be with him”

The apostle Paul spoke to the Romans about the strong inner desire that we have to finally arrive at that place where we are most at home. Even the creation itself is straining towards that end.

“Yet what we suffer now is nothing compared to the glory he will reveal to us later. 19 For all creation is waiting eagerly for that future day when God will reveal who his children really are. Against its will, all creation was subjected to God’s curse. But with eager hope, the creation looks forward to the day when it will join God’s children in glorious freedom from death and decay. For we know that all creation has been groaning as in the pains of childbirth right up to the present time. And we believers also groan, even though we have the Holy Spirit within us as a foretaste of future glory, for we long for our bodies to be released from sin and suffering. We, too, wait with eager hope for the day when God will give us our full rights as his adopted children, including the new bodies he has promised us. We were given this hope when we were saved. (If we already have something, we don’t need to hope for it. But if we look forward to something we don’t yet have, we must wait patiently and confidently)” (Romans 8 NLT).

We innately know that this present life is not the ultimate existence. We are not completely at home here. C.S. Lewis said it as well as anyone ever has, “If I find in myself a desire which no experience in this world can satisfy, the most probable explanation is that I was made for another world” (Mere Christianity New York: Collier Books, 1960, 120). That sums up our inability to be completely at home; we were made for another world!

He expanded that thought in The Problem of Pain (New York: Macmillan, 1962, 115): “The settled happiness and security which we all desire, God withholds from us by the very nature of the world: but joy, pleasure, and merriment He has scattered broadcast. We are never safe, but we have plenty of fun, and some ecstasy. It is not hard to see why. The security we crave would teach us to rest our hearts in this world and oppose an obstacle to our return to God.”

As we saw in the example of the rich man and Lazarus, those who died were still recognizable and had their own identity. You and I will not disappear into the robotic sameness as everyone else. We are God’s unique creation for all of eternity. You will still be you in eternity. Your heart is drawn to a place that is more like your real home than where you are now.

We can look forward to enjoying things there in fullness that we enjoyed here in part. That may be riding horses, sports, driving vehicles, or who knows what? I would ask “Why not?”

Our relationship with God will take on a new dimension but also our relationships with others. Paul said that we would know and love more fully in eternity. “12 For now we see only a reflection as in a mirror; then we shall see face to face. Now I know in part; then I shall know fully, even as I am fully known. 13 And now these three remain: faith, hope and love. But the greatest of these is love” (I Corinthians 13 NIV). God is love and the atmosphere around him is love. What a great place to be! “I have come home at last! This is my real country! I belong here. This is the land I have been looking for all my life, though I never knew it till now…Come further up, come further in!” (C.S. Lewis in The Last Battle).

We are all invited to eternity with God because of the sacrifice of Jesus Christ for our sins. It is important to understand that the default mode for human beings is hell. Just like you respond to an invitation to a party or wedding reception, if you plan on going to Heaven, you must send in your RSVP (French: répondez s’il vous plait which means “please respond”). You are invited. Jesus has a place prepared for you. Have you sent in your RSVP yet?