You are here: Home1 / Free Resources2 / Articles by Others3 / Identify Your Harvest Field by Terry Roberts

Terry Roberts, along with his wife Rebecca, have been pastors at Faith Christian Family Church for over three decades. They live in East Central Missouri, USA, and have two married children. In addition to pastoring a church with a heart for the world, they have made over 40 short-term missions trips. Terry served first as an assistant pastor in Glasgow, Scotland before returning to the area where he and Rebecca grew up. He is a graduate of Rhema Bible Training College and Regent University. Terry is the Vice-President of AIMS (Accelerating International Missions Strategies) in Colorado Springs, Colorado. Terry may be contacted by email at terry@fcfc.tv or through the church website, www.fcfc.tv. The following is an excerpt from the book, From Jerusalem to Rome: How a Local Church Can Impact the Whole World. To obtain a copy of this book, as well as other resources by Terry Roberts, visit www.fcfc.tv.

Jesus sent the Church into four specific intentional areas to reap a harvest. In Acts 1:8 Jesus identifies those four areas:

Acts 1:8
But you will receive power when the Holy Spirit comes upon you. And you will be my witnesses, telling people about me everywhere—in Jerusalem, throughout Judea, in Samaria, and to the ends of the earth.

The task of every church leader is to identify the four specific areas Jesus commanded us to reach. 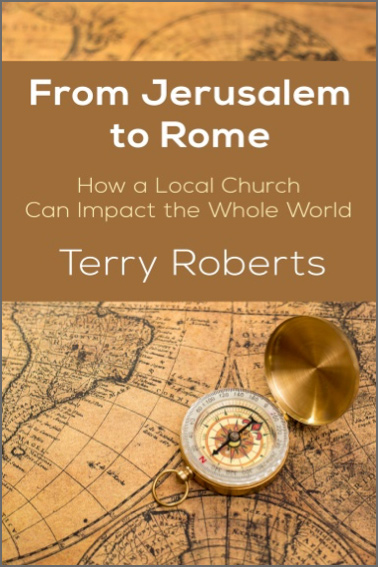 This is your first priority as a local church pastor. It has been said, “The light that shines the farthest, shines brightest at home.” Your first field is your Jerusalem. As you reach the people in your Jerusalem, they have the potential to become a part of your church. This principle is true for every local church on earth regardless of size or location. If you want a greater harvest; believe God for a greater harvest in your Jerusalem. In so doing, you will have a greater base to impact other areas of harvest around the world.

It is very important to affirm the role of your Jerusalem in local outreach. This is where mission begins, and it is a step that can’t be skipped. Unwittingly, those with a heart for the world have projected that this first step is finished and therefore unnecessary, especially in America where the gospel abounds. Not only is that false, it actually hinders the message going around the world. It all begins here! The local church, whether it is mega, house, simple, or any other flavor or type, is extremely important to Jesus Christ. That is what he is building on the earth. Matthew 16:18 records Jesus’ perspective on this matter:

Matthew 16:18
…and upon this rock I will build my church, and all the powers of hell will not conquer it.

Judea was made up of the southern portion of Israel including the city of Jerusalem. It was a local region as well as a city. The Judeans in southern Israel were much different from the Galileans in the north. The Galileans were the country cousins of the Judeans and having a distinct accent, were thought to be like hillbillies. They were agricultural, and probably the country folks of Israel to the Judeans.

Your Judea is the same culture as yours, but probably in a bigger area. This may be your region, your state, or even your nation. This group is very similar to you, but not likely to be close enough to be part of your Jerusalem.

We have prayerfully decided that our role in the Significant Church Network is currently our Judea. It was created to encourage and inspire churches in small county America. Most Christians in America attend these smaller churches, often in out of the way places. The pastors often feel less important than those of mega churches. God doesn’t see it like that, so we want to be part of encouraging them to keep reaching and keep flourishing.

Your Judea could be a regional church planting movement, or an affiliation with an organization similar to Significant Church Network. You may already have an outreach to your Judea. It may just be a matter of identifying and marking it. Your denomination or church network may be this Judea for you. Find it, affirm it, and support it.

Who were the Samaritans of Jesus’ time? The answer if found in the following:

“The Samaritans occupied the country formerly belonging to the tribe of Ephraim and the half-tribe of Manasseh. The capital of the country was Samaria, formerly a large and splendid city. When the ten tribes were carried away into captivity to Assyria, the king of Assyria sent people from Cutha, Ava, Hamath, and Sepharvaim to inhabit Samaria (2 Kings 17:24; Ezra 4:2-11). These foreigners intermarried with the Israelite population that was still in and around Samaria. These “Samaritans” at first worshipped the idols of their own nations, but being troubled with lions, they supposed it was because they had not honored the God of that territory. A Jewish priest was therefore sent to them from Assyria to instruct them in the Jewish religion. They were instructed from the books of Moses, but still retained many of their idolatrous customs. The Samaritans embraced a religion that was a mixture of Judaism and idolatry (2 Kings 17:26-28). Because the Israelite inhabitants of Samaria had intermarried with the foreigners and adopted their idolatrous religion, Samaritans were generally considered “half-breeds” and were universally despised by the Jews.” [1]

Your Samaria is different cultures, whether they are nearby or across the sea. They may simply be a local immigrant community.

Just as easily, they could be geographically far away in Europe or South America. Most local churches already put foreign missions money into this category because of a relationship with someone who is already working in that field.

For our church, this is primarily Haiti and Europe. I served as an assistant pastor in Glasgow, Scotland and have made many trips to Eastern and Western Europe. We would love to see another reformation there and work towards our Samaria goal by consistently supporting missionaries active in both Europe and Haiti.

Xenophobia (fear of foreign cultures), can keep us from reaching out to those we may disagree with in matters of politics and culture. Like Jonah who was sent to the Ninevites, we must learn to love the people of a culture even if that culture is different from ours. Christians and Christian churches should be exemplifying and modeling that attitude and behavior to the world around us. Jesus said we are to be salt and light to our culture. Racism and hatred have no place in our culture and especially in our churches. Martin Luther King Jr. said: “I have decided to stick with love. Hate is too great a burden to bear.” [2]

Ends of the Earth

When we think about missions, we tend to think of geographical and political borders. In Scripture, another term is used because borders of nations are always changing. Look at the changes in European borders in just the past century. The default category to focus on is people groups.

Genesis 12:3
I will bless those who bless you and curse those who treat you with contempt. All the families on earth will be blessed through you.

The Hebrew word for families is mishpâchâh. It literally means; a family, a circle of relatives, a class of persons, a species, a tribe or a people. [4]

Matthew 24:14
And the Good News about the Kingdom will be preached throughout the whole world, so that all nations will hear it; and then the end will come.

The Greek word for nations is ethné. It literally means a multitude, people, race, belonging and living together. [5] We get our word for ethnic groups from this root word. It is used again in Matthew 28 at what is known as the Great Commission:

Matthew 28:18-20
Jesus came and told his disciples, “I have been given all authority in heaven and on earth. Therefore, go and make disciples of all the nations, baptizing them in the name of the Father and the Son and the Holy Spirit. Teach these new disciples to obey all the commands I have given you. And be sure of this: I am with you always, even to the end of the age.”

It is clear from Scripture that reaching the unreached is the finish line for the Church.

Revelation 5:9
You are worthy to take the scroll and break its seals and open it. For you were slaughtered, and your blood has ransomed people for God from every tribe and language and people and nation.

This is the target area that is most often neglected by churches. Years ago, it was an area in which I was also ignorant. As a local church, we didn’t feel that this was part of our calling. You may feel that same way. Who do you know that is engaging the unreached in these areas, and what could you do if you did know someone who was concerned about them?

Dr. Howard Foltz was my missions professor at Regent University. I had several required classes in missions with him, and he, along with others changed my perspective of reaching out to the unreached. He and others helped us strategically engage the area of the ends of the earth. As of this writing, our local church has been actively engaged in sponsoring and helping to train leaders in over 800 new church plants among the unreached, primarily in the 10/40 window. It required a target, a strategy, and a way to get involved. It wasn’t as difficult as I thought it would be.

2 Peter 3:12 NKJV
…looking for and hastening the coming of the day of God.