You are here: Home1 / Free Resources2 / Articles by Tony Cooke3 / Reverencing Christ in His Deity

Reverencing Christ in His Deity 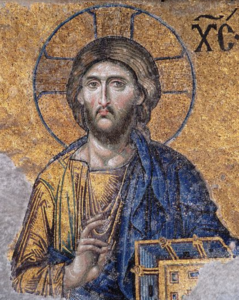 With the Christmas season approaching, this would be a great time to do some teaching about the nature of who Jesus really is. Below are several points about the Deity of Christ that may be of help as you develop messages.

What is John teaching?

The Trinity: “and the Word was with God” (“with” indicates there was more than one person).

The Deity of Jesus: “and the Word was God.”

Jesus’ Role as Creator: “All things were made through Him, and without Him nothing was made that was made.”

The Humanity of Jesus: “And the Word became flesh and dwelt among us.”

The Apostle Paul Weighs in on the Deity of Christ

6 Though he was God, he did not think of equality with God as something to cling to. 7 Instead, he gave up his divine privileges; he took the humble position of a slave and was born as a human being. When he appeared in human form, 8 he humbled himself in obedience to God and died a criminal’s death on a cross.

15 Christ is the visible image of the invisible God. He existed before anything was created and is supreme over all creation, 16 for through him God created everything in the heavenly realms and on earth. He made the things we can see and the things we can’t see—such as thrones, kingdoms, rulers, and authorities in the unseen world. Everything was created through him and for him. 17 He existed before anything else, and he holds all creation together.19 For God in all his fullness was pleased to live in Christ…

2:9 For in Christ lives all the fullness of God in a human body.

Jesus continually equated Himself with the Father.  In John 10:30 (NLT), Jesus said, “The Father and I are one.”

The Sharing of Titles

Jesus and the Father shared titles and or descriptions of their work.

Quotes About the Deity of Christ

“If God never became flesh, like us, he could neither redeem us nor reveal to us his promise of eternal life. It is only by becoming like us that God can make us like him, restoring us in his image.”
– Irenaeus of Lyon

Excerpted from the Nicene Creed: “We believe in one Lord, Jesus Christ, the only Son of God, eternally begotten of the Father, God from God, Light from Light, true God from true God, begotten, not made, of one Being with the Father. Through him all things were made. For us and for our salvation he came down from heaven: by the power of the Holy Spirit he became incarnate from the Virgin Mary and was made man.”

“Jesus that I know as my Redeemer cannot be less than God.”
– Athanasius

“Rejoice that the immortal God is born that mortal men may live in eternity.”
– Jan Hus

“I have had so many experiences of Christ’s divinity, that I must say: either there is no God, or he is God.”
– Martin Luther

“By a Carpenter mankind was made, and only by that Carpenter can mankind be remade.”
– Desiderius Erasmus

“He who… does not perceive Christ to be God… is blind amidst the brightness of noon day.”
– John Calvin

Late in time behold Him come, Offspring of the Virgin’s womb:

Veiled in flesh the Godhead see; hail the incarnate Deity

Pleased as man with men to dwell, Jesus, our Emmanuel.”
– Charles Wesley (2nd verse of “Hark the Herald Angels Sing”)

“Emmanuel. God with us. He who resided in Heaven, co-equal and co-eternal with the Father and the Spirit, willingly descended into our world. He breathed our air, felt our pain, knew our sorrows, and died for our sins. He didn’t come to frighten us, but to show us the way to warmth and safety.”
– Charles Swindoll

“Jesus was the meeting place of eternity and time, the blending of deity and humanity, the junction of heaven and earth.”
– Oswald Sanders

“Jesus Christ is what God does, and the cross where God did it.”
– Frederick Buechner

“Jesus was God spelling himself out in language humanity could understand.”
– S. D. Gordon

“Jesus was God and man in one person, that God and man might be happy together again.”
– George Whitefield

“Depend upon it, my hearer, you never will go to heaven unless you are prepared to worship Jesus Christ as God.”
– Charles H. Spurgeon

“Remember, Christ was not a deified man, neither was he a humanized God. He was perfectly God and at the same time perfectly man.”
– C. H. Spurgeon

“Jesus Bar-Joseph, the carpenter of Nazareth, was in fact and in truth, and in the most exact and literal sense of the words, the God ‘by whom all things were made’… He was in every respect a genuine living man. He was not merely a man so good as to be ‘like God’—He was God.”
– Dorothy L. Sayers

“The really staggering Christian claim is that Jesus of Nazareth was God made man… The more you think about it, the more staggering it gets. Nothing in fiction is so fantastic as is this truth of the Incarnation.”
– J. I. Packer

“The name Emmanuel takes in the whole mystery. Jesus is ‘God with us.’ He had a nature like our own in all things, sin only excepted. But though Jesus was ‘with us’ in human flesh and blood, He was at the same time very God.”
– J. C. Ryle

I hope you benefit from these insights. It is vital that people understand who Jesus really is. He is not merely a notable religious leader or a good teacher. He is “the Word made flesh.” He is God the Son, manifested in the flesh. That is what qualifies him to truly be our Savior and Lord.