You are here: Home1 / Free Resources2 / Articles by Others3 / A Good Report from Your Doctor

A Good Report from Your Doctor:

Since 1974 Rodney Lloyd and his wife, Nita have planted and overseen churches in the United States and ministered to churches and Bible Schools in the USA, South Africa and in other nations. They both are graduates of RHEMA Bible Training Center, he in the charter class of 1974-75, she in 1979. He was an instructor at RHEMA USA from 1978 – 1981 and at RHEMA South Africa in 1991 and 1992. Currently, they are members of the New Covenant Ministries International Team and from 2007 to 2018 they did apostolic work in several African nations. At present, they are working as part of the pastoral team with their daughter and son-in-law, who planted Border City Church in Detroit, MI. 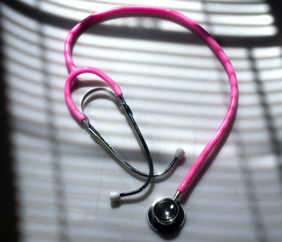 Author’s Note: What is written here is intended as instructions for an individual who is “standing on God’s Word” to see sickness leave his/her body, i.e., to see the manifestation of the healing. This is the covenant right for every follower of Jesus Christ. Jesus established this covenant on the Cross of Calvary when He became God’s sacrifice for our sins and took our sicknesses on Himself. Even as He purchased salvation for all, He purchased healing for all. You will easily see my writing is quite repetitive. This is intentional as repetition is very helpful for learning. My desire is for the readers to see the full and complete manifestation of their healing!

It is quite common for someone to ask for agreement in prayer that they will receive a good report when they visit the doctor for an examination concerning symptoms they have been experiencing. I will not say we can never do this. I will say this is prayer with the wrong focus and it puts faith in a realm where it is not intended to function.

Q: What is to be the focus of our faith in every situation?

A: The Word of God. You can only have faith for what God says.

Q: What does God say?

A: Isaiah 53:1, 5 – “Who has believed our report and to whom has the arm of the LORD been revealed? He was pierced for our transgressions, he was crushed for our iniquities; the punishment that brought us peace was on him, and by his wounds/stripes we are healed.”

Relative to healing, this is what we can believe and is to be the focus of our faith: that by his wounds we are healed. This is God’s good report!

Obviously, our desire is that all symptoms and all disease will ultimately be removed from our bodies and to hear the doctor give the best report, “You are free from disease.” But, as we will see below, this is not to be the focus of our faith, but, rather the focus of our hope or expectation.

The Lord’s report: by Jesus’ stripes we were healed, before we were born, even before the sickness comes. When we make the Lord’s report our focus, and believe it, that supersedes all other reports, even the bad reports that might come before the complete manifestation of our healing.

If our faith is in “getting a good report from the doctor” we are focusing on the manifestation of our healing and placing it in a time frame.

So, if we go to the doctor “believing” he will give us a good report of our physical condition, and the doctor gives us a bad report, our “faith” plummets because we were focused on the manifestation and we were placing “getting our manifestation” into some time frame. Manifestations are always future, even if only seconds after we exercise our faith.  Because they are future, they are to be the focus of our hope or expectation, a very important element of the equation.

Romans 4:17, 18
“(As it is written, I have made you a father of many nations), before him, whom he believed, even God, who gives life to the dead, and calls those things which are not, as though they were.”) “Who against hope, believed in hope, that he might become the father of many nations, according to that which was spoken. So shall your seed be.”

Hope [Greek: elpis] – expect, expectation, or expectancy. Confident expectation of a favorable outcome based on what God has spoken.

Against hope – there was no reason for Abraham to even hope (have expectation) that what God said would come to pass, but:

What did he believe? He believed what God said – “I have made you a father of many nations.”

In relation to healing, the Word says, “He bore our sicknesses and carried our diseases.” “By His stripes we are healed.”

But the symptoms in our bodies “say” we are sick. What do we do? We do as Abraham did:” We believe in hope,” i.e., we believe with expectation! We believe the Word, “He bore our sicknesses in His body; by His stripes we are healed…” We have expectation for the manifestation of what the Word says.

Failure to receive the healing that Jesus has already provided is usually because:

We believe the word and expect the manifestation. If this is our perspective, our faith and trust are in God and what He says, not in whether or not the doctor tells us there is nothing wrong with our bodies.

When we go to the doctor, we are presenting our bodies to the doctor for examination and to hear from the doctor his/her evaluation based on the evidence he/she sees in our bodies. There is nothing wrong with doing this. He/she tells us what they see – those are the facts. But the facts are subject to the truth we had before we went to the doctor: Jesus bore our sicknesses and carried our diseases; by His stripes we are healed!

If your faith is in what God says, even if you receive a bad report from the doctor, you’re unmoved because you believe you are healed and you expect it to manifest.