You are here: Home1 / Free Resources2 / Articles by Others3 / ENGENDERED: What Was God Thinking? by Patsy Cameneti

Patsy Cameneti is a seasoned teacher, pastor, and author and internationally sought-after speaker. She’s recognized for her unique ability to simplify complicated truths to believers around the world in churches, seminars, and conferences. Along with her husband, Tony, the Camenetis pastor Rhema Family Church—a vibrant, ethnically diverse church in Australia as well as directing Bible colleges in Australia and Papua New Guinea. For more information about her previous books, For Such a Time as This and Secrets to Powerful Prayer, or the Cameneti’s ministry, visit www.cameneti.net. The following article is an excerpt from Patsy’s book and can be purchased from their website for $18 USD. 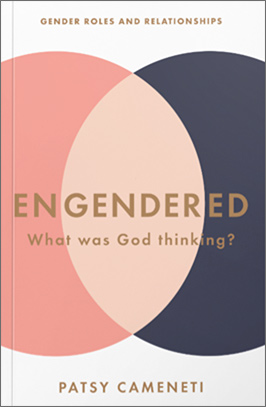 Right from the beginning, God had a plan for mankind. He engendered the course of human families not simply by suggestion or even direction but by His operation in the creation of humans—male and female.

God generated or brought about two genders based on how He created mankind—male and female created He them. The fall of Adam’s race fractured and confused God’s plan for male and female.

For many years, I’ve had the privilege of teaching the subject of marriage and family, a topic I believe is very close to the heart of God. The Bible schools where I taught were in different countries with different traditions and cultures regarding the subject, so I prayerfully asked the Lord to help me represent His thoughts and ways and not just the culture I was most familiar with or my personal experience. The answer to this prayer is ongoing, but up to now the Holy Spirit has kindly, yet purposefully, led me to take away the trappings of culture and look away from negative—even positive—personal experience. He’s encouraged me to look completely at God’s idea of man and woman.

What was God thinking when He made man and woman? What do His intentions have to do with the roles they play? What did the Creator want marriage to look like? What did He want family to look like?

In any culture, there may be good traditions while others run cross-grain with God’s intention, but I encourage you to strip away all viewpoints and look at the raw truth of the Bible.

A lot of times when we approach something as core as our gender, or family, and marriage, we bring with us, even subconsciously, our own experiences or what we have witnessed in other people.

We must let God and His Word be the standard of measure! Why? It’s true. Unbiased. And it works for all cultures, all ages, and for all time. To do this, we must determine to look away from our own experience, our parents, our aunts and uncles, and even look away from our own situation as the standard. Society is not a safe standard either. It keeps changing (2 Corinthians 10:12). Instead, we must look to God as the standard! God created the sexes (male and female). He hasn’t changed. Confusion about what it means to be a godly man or woman, husband or wife, father or mother, and confusion about gender and sexuality is cleared up when we look to our Creator. We are His idea in the first place.

At the climax of creation as the crowning achievement of all He had designed, God created the human being—male and female—to image and represent Himself. The pattern for the male and female genders came out of God Himself—completely original, perfect, and pure.

When Jesus was questioned on the subject of marriage, He didn’t go back to the law for His standard. He went back further yet—to creation. In the same way, for clarity regarding sex and gender, we need to follow Jesus’ example and go back to creation.

When God created man, He did not use a pattern of anything He had made previously on any other day of creation. The pattern God used to make man was Himself.

One primary reason we know that man didn’t evolve from any other type of life created earlier is that God very plainly said four times in Genesis that the pattern He used to make man was Himself.

Like a mirror is not a person but images or reflects a person, Adam and Eve were made to image and reflect God. In other words, if you could see man, there wouldn’t be any confusion about what God was like. Man was God’s likeness.

No matter where a person is born or what language they speak, when they come to know God, the same wonderful characteristics are identified world over! Even though God is invisible, He delights in making Himself known and real to people and uses nature to make His invisible qualities obvious.

However, the Bible doesn’t say anything was created in God’s image until God created man: “So God created man in His own image; in the image of God He created him; male and female He created them” (Genesis 1:27). While we can see godly attributes in nature, it was the human that God specifically created with the purpose and the ability to image Himself.

Have you ever seen a series of mirrors or “house of mirrors” in an amusement park that multiplies the image of yourself? In the same way, God originally meant to have His image reflected and then reflected again in the next generation and on and on it would go. Because God said to be fruitful and multiply and fill the earth, His earth would literally be filled with His image.

Everything would have proceeded according to God’s design, and His perfect image would have been multiplied in the earth had it not been for the serpent and his successful temptation to choose against God. Adam had a son in his own image. Essentially, Adam broke, and then he had a son in his broken image. Adam passed death and the sin nature on to us all.

Man’s nature is composed of three parts: spirit, soul, and body, and all three parts were impacted by his fall and separation from God. Think of man’s spirit like a factory. Proverbs 4:23 says that out of our heart come all the issues of life. If there is death in his spirit, it’s not just latent. The spirit produces death, which works up into the soul—works up into the mind, works up into the will, and works up into the emotions to break and darken them. The soul, then, becomes an expresser of whatever is happening in the spirit, as well as what is negatively happening around about externally. As a result, the soul can be a terrible distortion of what was originally designed to image God. The distorted soul becomes not God’s intention at all.

The body also took a hit as a result of the fall. It didn’t show up immediately, but in time, the body progressively broke down and gradually reduced the life span.

The body expresses the spirit that is separated from God as we saw at in the previous chapter. Your body also is the expresser of the soul, your thoughts, will, and emotions. Because the body expresses the fallen spirit and the darkened soul, it is consequently weakened by disease, sickness, and degeneration.

The devastation the fall had upon the spirit, soul, and body is apparent. But what about the characteristics of God that were to be tangibly imaged and experienced through male and female? If we examine the sexes and the stereotypical characteristics of their gender roles, we find damage done there as well.

For this reason, the fall was a tragedy for God as well as a terrible outcome for humans. How could God be “seen” and correctly understood in the earth? Would the man and woman He created ever be able to naturally represent His characteristics again and make Him visible?

Think about this from the devil’s standpoint. If the devil’s goal was to deface and desecrate the image of God that he saw in the human, he would need to begin by spiritually separating man from God. Then the devil went on to fracture what is essentially the epicenter of our human identity: the male and female genders.

Apart from a person’s spirit, there is nothing more core to his or her identity than their sex.

The male as man, husband, and father and the female as woman, wife, and mother were meant and designed to image and to reflect the unseen God. Marriage was to reflect Christ and the Church. Family was to reflect the Father and His family. Yet, as a result of the fall, all these roles failed to serve their purpose in imaging God and actually caused God to be obscured and misunderstood, feared, despised, and rejected. Originally, we were made in God’s glorious and beautiful image. Now, we reproduce after our broken image. The reason people think God is cruel, unloving, and uncaring is because they “learned” that about Him through His broken image in male and female.

God had to make a new representative. He had to get a different, unfractured image on the earth. Although He didn’t annihilate Adam’s race with all of its mess and misery, He actually did start a new species in the human race. First Corinthians 15:45 says, “The Scriptures tell us, “The first man, Adam, became a living person.” But the last Adam—that is, Christ—is a life-giving Spirit” (NLT).

God had a plan for redemption! As clever as the devil’s plan was, God’s plan to redeem mankind in every way he was damaged was even more brilliant.  Redemption truly means so much more than simply being saved so you go to heaven when you die. Let the scope of redemption include everything that was broken in the fall and everything that required redemption so it can be returned to its original intention. If you can find something in any area of life—spirit, soul, and body—that doesn’t image or represent God, there’s redemption for it.

As a result of both becoming sin and then being punished by God for our sins, Jesus’ visage that had perfectly imaged the Father all through his life was marred and disfigured. Jesus’ visage was marred so that man and woman can once again image our wonderful Creator as we were intended to do. Jesus redeemed Humankind, not simply from the curse of the law but back to what He had ENGENDERED from the beginning.