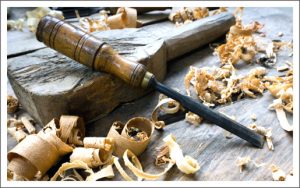 Jesus was from Nazareth, and the Bible tells us He returned to His hometown after healing the woman with the issue of blood and the daughter of Jairus. These were two wonderful manifestations of God’s will through Jesus’ ministry, and it is likely that Jairus and the woman came to Jesus because of the many reports of healings they had heard. Jesus was known throughout the countryside as a healer.

But in Mark 6:3 in the Message Bible, the people of Nazareth who had just heard Jesus teach a wise and wonderful message in the synagogue said “He’s just a carpenter,” and they took offense at him.

Yes, Jesus was a carpenter, but His obedience to his Father’s will was what actually defined Him. The strength of Jesus’ life was that He knew who He was, and what He was born on earth to do. He wouldn’t have been bothered by what other people said about Him, except that it caused unbelief in those who believed the belittlers. They said He was “just a carpenter,” limiting His effectiveness. I think that grieved Jesus, and as the Bible says “He marveled because of their unbelief.” But we see Him moving on, going “among the villages teaching” (Mark 6:6).

What “just” are we guilty of saying about ourselves or others? Using the word “just” in front of a description is limiting at the least, and is often intended to be demeaning. “I’m just a janitor, she’s just a stay at home mom, he’s just a barista, she’s just a nurse’s aide in a nursing home…”

Our tendency is to judge after the flesh, to base our assessment of a life on what we see with our eyes. Even when we know that the Bible tells us to “regard no one according to the flesh” (2 Cor 5:16), we still can be very quick to sum up a person’s worth with words that leave no expectation for transformation or growth.

Jesus asked His disciples a question once in Caesarea Philippi, “Who do you say that I am?” Peter gave an answer that Jesus said could have only been revealed by God. Peter didn’t say “you are just a carpenter, or just a healer, or just a teacher,” but he said “You are the Christ, the Son of the living God.”

Wouldn’t it be breathtaking to be able to see everyone as God sees them, ourselves included? Would it require a revelation from God for that to happen, as it happened with Peter? Is it a spiritual grace to be able to say things about people by the Spirit instead of by the flesh? Can we by faith see things that are not yet, as though they are, in our brothers and sisters?

What God says about us in Christ has a prophetic element to it, an eternal glory-to-glory quality to it. We are in the process of realizing who God says we are and we aren’t “just” who or what we are right now. What a gift to ourselves and to others, then, to agree with and expect God’s intentions for our lives. When it comes to how I see myself and others, I want Jesus to marvel at my belief, not my unbelief.