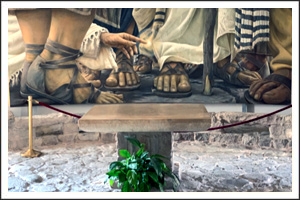 At the point of contact, the painter creates a representation of the moment the power went out of Jesus, like a small glowing ball of light. The ESV renders that moment as “And Jesus, perceiving in Himself that power had gone out from Him, immediately turned about in the crowd and said, ‘Who touched my garments?’” (The full story is found in Mark 5:24-34)

The woman had heard of Jesus, had heard of healings that had occurred because of him, and said to herself “If I touch even His garments, I will be made well.” With that statement of faith in her heart and mind, she reaches. We can only imagine what she went through that day to be able to do what she did. The Bible says there was a great crowd following and thronging about Him. She did not feel well, yet she pushes herself through all those people and manages to at least touch the very bottom of Jesus’ garment. It was all she needed.

When Jesus found her, after asking who touched Him, He said to her “Daughter, your faith has made you well; go in peace, and be healed of your disease.” She received what she came to Him for, and it happened through a point of contact.

That phrase, “point of contact” is not in the Bible, yet we see people throughout Scripture using objects and acts of obedience to receive healing from God. The handkerchiefs, towels and aprons in Acts 19 that were taken from Paul’s body became points of contact for people needing healing. When those “cloths” were laid on the sick, they became well.

In the Old Testament, according to the directions of the Lord, Moses makes a bronze serpent and sets it on a pole, so that anyone bitten by a snake could look at it and be healed. That bronze serpent was a point of contact for the people of Israel. Later when the people began to worship the snake on the pole, it became necessary to destroy it. The lesson learned here is to never worship a point of contact!

2 Kings 5 tells the story of Naaman, a high-ranking commander for the king of Syria, who sought help from Elisha the prophet because he had leprosy. Elisha sent word to Naaman through a servant to go wash in the Jordan River seven times. Though Naaman balked at these directions at first, he finally did what Elisha said, and that obedience was the point of contact for his complete healing.

So, a “point of contact,” while never to be worshiped in and of itself, can be a means of connecting us with the will of God and receiving all that God has provided in His love toward us. Effort may be required in some cases as with the woman with the issue of blood, and with Naaman. Sometimes the actual point of contact may seem unusual, such as the work cloths taken from Paul’s body.

But I don’t think a point of contact is only restricted to receiving healing.

While we were on the tour through Israel, one of the things I really noticed was how people responded to the many holy sites scattered throughout the country. I noticed how I responded to these sites! Some of these places really moved me, such as the Sea of Galilee, the Garden Tomb, and the Western Wall area in the underground tunnels. I had encounters with the presence of God in these and other places, and I was impacted and changed.

Do I have to be in a holy site to encounter the Lord? No, I have many of those kinds of moments in my own home. Yet those places—because of their significance in Biblical history—became a point of contact for me. They facilitated what God wanted to do in my life in that moment.

What grieved me in Israel was not the people who seemed to worship the sites; only God can judge their hearts. Only God knows what their intention was. I saw many who were touching, kissing, kneeling in reverence before places of biblical significance or devotion. For some it could have been an empty ritual of tradition, legalism or superstition. But it may not have been that for everyone.

For others, I feel certain they were acting out their devotion to God, in the only way that they knew how. The place, the item, the history of where they were at became a point of contact for them to release their devotion or faith.

What grieved me was the disdain I heard concerning what could have been a point of contact with the Lord for another. Can we appreciate without judging another man’s heart what may be a profound moment in their spiritual and physical life? We can be so quick to censure what is unfamiliar to us. Can’t you imagine the religious people of Paul’s day scorning the reports of people being healed when a sweat cloth was laid upon their bodies? And what about the reports of Peter’s shadow falling on people and the healings that followed?

Paul in Romans 14 lays out a beautiful attitude to have toward others who are working out their salvation along life’s journey. We are all learning as we go, so let us extend patience, kindness and faith that God is at work in all His children, to will and to do of His good pleasure.

One person considers one day more sacred than another; another considers every day alike. Each of them should be fully convinced in their own mind. Whoever regards one day as special does so to the Lord. Whoever eats meat does so to the Lord, for they give thanks to God; and whoever abstains does so to the Lord and gives thanks to God. For none of us lives for ourselves alone, and none of us dies for ourselves alone. If we live, we live for the Lord; and if we die, we die for the Lord. So, whether we live or die, we belong to the Lord. For this very reason, Christ died and returned to life so that he might be the Lord of both the dead and the living.

You, then, why do you judge your brother or sister? Or why do you treat them with contempt? For we will all stand before God’s judgment seat. 11 It is written: “‘As surely as I live,’ says the Lord, ‘every knee will bow before me; every tongue will acknowledge God.’” So then, each of us will give an account of ourselves to God. Therefore let us stop passing judgment on one another. Instead, make up your mind not to put any stumbling block or obstacle in the way of a brother or sister.